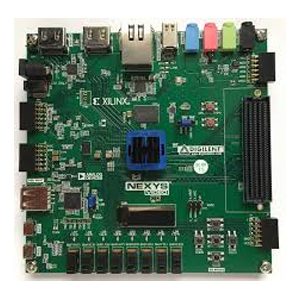 A few months ago, we were given notice that our memory provider would be obsoleting the production of cellular RAM. With this in mind, we asked our industry partners what they were looking for and redesigned our Nexys 4 board to use the popular DDR external memory. The Nexys 4 DDR is a drop-in replacement for our cellular RAM-based Nexys boards. Featuring the same Artix-7™ field programmable gate array (FPGA) from Xilinx, the Nexys 4 DDR is a ready-to-use digital circuit development platform designed to bring additional industry applications into the classroom environment. With its large, high-capacity FPGA (Xilinx part number XC7A100T-1CSG324C) and collection of USB, Ethernet, and other ports, the Nexys 4 DDR can host designs ranging from introductory combinational circuits to powerful embedded processors. Several built-in peripherals, including an accelerometer, a temperature sensor, MEMs digital microphone, speaker amplifier and plenty of I/O devices allow the Nexys 4 DDR to be used for a wide range of designs without needing any other components. The most notable improvement is the replacement of the 16 MiB CellularRAM with a 128 MiB DDR2 SDRAM memory. Digilent will provide a VHDL reference module that wraps the complexity of a DDR2 controller and is backwards compatible with the asynchronous SRAM interface of the CellularRAM, with certain limitations.

There are no reviews yet.

Only logged in customers who have purchased this product may leave a review.

₹6,500.00
Any device with a standard serial interface can connect to Ethernet with embedded devices servers in a snap.
Add to Wishlist